During a normal week at Detroit Sewn, founder and CEO Karen Buscemi says the hardworking staff at her sewing factory in downtown Pontiac would be busy cutting fabric, working on patterns and samples, or sewing commercial products ranging from leggings to swimwear and pillowcases.

The past week has been anything but normal, though.

As schools, businesses, and daily life across Michigan – and around the world – came to a grinding halt in response to the COVID-19 pandemic last week, medical professionals began to prepare for the worst. In spite of the U.S. Surgeon General’s pleas asking consumers to stop purchasing and stockpiling hospital masks, supplies waned. As the virus spread and demand for protective personal equipment increased globally, the medical supply chain strained under the pressure and hospitals braced for an impending shortage of the masks and gowns necessary for the proper care of patients. Last week, while the outbreak continued to expand globally, the shortage grew increasingly precarious.

As hospitals around the state – and the globe – experience a shortage of protective medical gear due to coronavirus, Detroit apparel manufacturers have stepped in to dedicate their factories to producing masks while creating jobs in an uncertain economy.

On Wednesday, Buscemi says she received an inquiry about producing masks for Trinity Health, a health system with 92 hospitals and hundreds of health care facilities across 22 states, including Michigan. She says she knew right away that the problem was urgent. “I have never been more proud of my team,” she says, adding that the crew was able to pull everything together in “basically a day and a half” in order to start production by Monday morning.

Buscemi says the team quickly manufactured four prototypes before arriving at the final mask design. On Thursday night, she put out an urgent call for professional sewers. By Saturday, Buscemi says she received over 1,000 requests to work. Ultimately, she was able to add five new team members to her initial staff of seven over the weekend.

In order to protect the health of workers during production, Buscemi says, “The whole factory is reconfigured and, [on] the line, each machine is set 6 feet apart,” exceeding the physical distancing guidelines set forth by the World Health Organization. 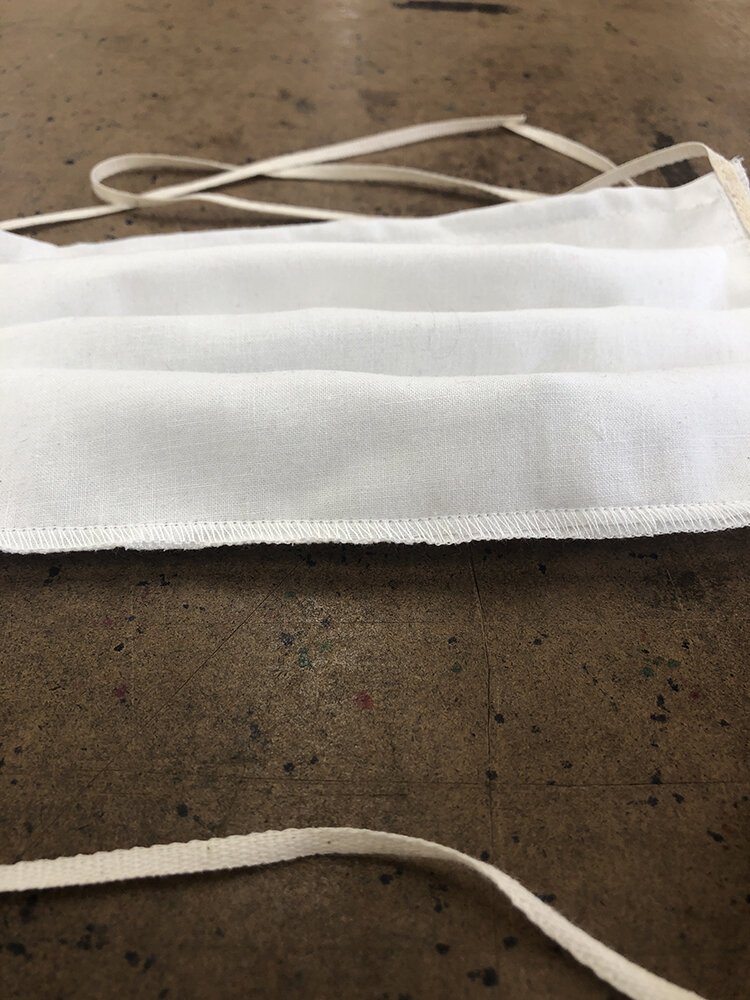 Buscemi estimates that Detroit Sewn will be able to produce 1,000 masks — made from 100% cotton using materials sourced from vendors in the U.S. — per day during the first week of production, working one shift per day as the crew establishes a workflow. Next week, she hopes to add a second shift that will double production. Buscemi says the factory is currently operating with eight industrial sewing machines and is seeking funding to purchase additional machines to increase output.

Buscemi believes part of the shortage stems from a lack of domestic manufacturing. “Production went offshore so many years ago that you have a real finite number of vendors in [the United States] that supply fabrics,” she says. “… In China, I'm sure there's hundreds and hundreds and hundreds of places that have fabric. Here, maybe you've got 25. As far as I'm concerned, this is about finding a way — when this is all over — to keep manufacturing here.”

Max Schmidt, founder of Commonwealth Sewing Co. and 1701 Bespoke, a custom menswear clothier in Detroit, says complications in the medical supply chain have created roadblocks in his efforts to produce surgical masks and gowns in response to the shortage over the past week.

A particular obstacle, Schmidt says, has been the lack of availability of a special material called spunbond meltblown spunbond. SMS is a highly specific nonwoven fabric needed to produce masks and gowns with sufficient protection for medical staff in a surgical environment. “There’s one type of machine that produces [SMS] and there's a handful of companies around the world that actually make it,” Schmidt explains. “… So, it's very hard to find the material right now.”

Schmidt says he’s spent the last week researching alternatives to SMS and, although he hasn’t been able to find much useful information, he isn’t giving up. “[On Sunday] morning, I reached out to a doctor that wrote a big peer-reviewed paper comparing the different materials for hospital gowns, and it had alternatives to SMS nonwoven,” he says. “So, hopefully, he can give me some answers on different materials I can source.”

Schmidt says he plans to begin production on surgical protective gear – especially gowns – as soon as he’s able to acquire the necessary materials and equipment. In the meantime, he says Commonwealth will begin producing nonsurgical masks later this week. Schmidt explains that, although the cotton masks shouldn’t be used in surgery or to treat coronavirus patients (in those circumstances, medical personnel should wear respirators), they can still be used by hospital staff and other individuals outside of those situations.

“Our line should be up and running on Wednesday or Thursday,” he says, adding that he expects to produce up to 2,000 masks per day between two shifts, utilizing a team of nine sewers with the possibility of hiring “a few extra” to help with cutting. Schmidt says he is in talks with several local hospitals and is also considering producing cotton masks for use by individuals at home, noting they could be useful to those living with someone who might have COVID-19.

Like many of his colleagues in the city’s apparel industry, Josh York also joined the effort to help solve the mask shortage. York is no stranger to helping those in need – his company, the York Project, is a Detroit garment factory and streetwear brand that has helped the nation’s homeless population since 2012. 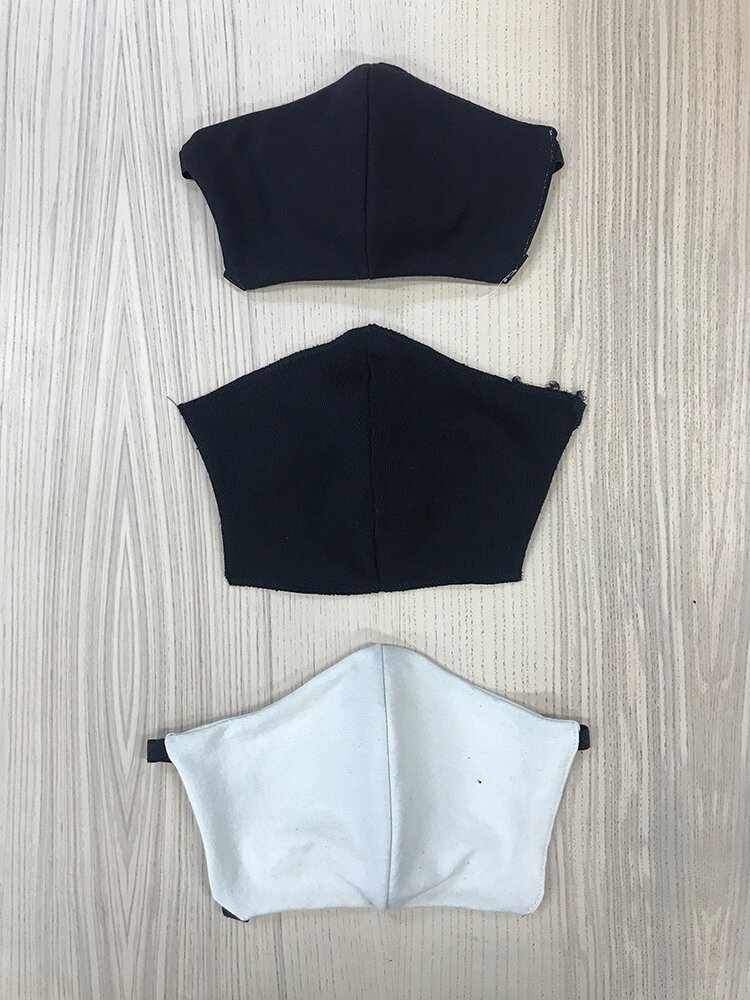 York says his company is producing nonsurgical masks at a smaller scale to help at a more grassroots level, working with a professional sewer using scraps the factory has on hand from apparel production. Once a shipment of elastic arrives on Wednesday, York estimates that the company will have enough materials to make “a couple thousand” masks. The plan “is to donate them to homeless shelters or other organizations that maybe don't have the means [to purchase them elsewhere],” he says. Beyond those masks, York says the factory has the capacity to manufacture masks at a larger scale and encourages hospitals and other organizations to contact him about their needs.

At the grassroots level

Smaller local apparel companies are also getting involved in the effort to ease the mask shortage. Cassidy Tucker, co-founder of Deviate, Detroit’s first prêt-à-couture house, says she and co-founder/sister Kelsey Tucker were partly inspired to help by their older sister, Lauren, who works for FEMA in the New York region. “We hear her stories all the time,” Tucker says. “And it motivates us to try to do something about it and be part of the solution.”

Tucker says she reached out to several area hospitals last week to determine their level of need and received a response from St. Joseph Mercy Oakland. She and Kelsey designed two prototypes – a simple cotton mask and a more sophisticated reusable design that allows for the insertion of a filter – and delivered them on Sunday morning. Tucker says they are waiting for feedback on how to improve the designs to meet the hospital’s needs. “We can produce, but we’re not mask experts,” she says. “So, it's really our job, I think, to listen closely to what health care professionals need and then see how we can apply our skills to fill that gap.”

Tucker says Deviate will be able to produce between 50-75 nonsurgical cotton masks per day for donation to area hospitals. The brand is also selling a special beanie on their website. Each beanie sold will enable the company to donate three masks to local hospitals in need. “It's important to us to try to make sure that we can provide these masks free of charge,” Tucker says, adding, “Which, hopefully, we can continue to do – as long as we can source this fabric and find these materials at a relatively affordable cost.” Tucker says Deviate has created a video tutorial to teach people how to make their own masks at home using woven cotton fabric they may already have on hand, like pillowcases.

The Industrial Sewing and Innovation Center is also working on a response to the shortage. Ann Fitzpatrick, strategic communications counsel for ISAIC, said in an emailed statement on Sunday that “[ISAIC is] part of a national consortium that is working to give our region the ability to ramp up production of surgical masks (into the millions) and provide a centralized point of purchase.” Fitzpatrick added that CEO Jennifer Guarino is working diligently on the initiative, and ISAIC hopes to provide more information by mid-week.