On a cold morning in December, the interior of Detroit Sewn is warm and inviting. Karen Buscemi, CEO of the full-service contract sewing and dye sublimation company, stands in an aisleway between rows of industrial sewing machines. Gathered around a worktable, a handful of sewers discuss their projects.

The sewing factory is one of many fashion-related endeavors Buscemi has spearheaded over a 20-year career. She’s also worked as the editor of bygone StyleLine magazine and founded the nonprofit Detroit Garment Group, through which she tried to build a garment district in the city, which she describes as “a lengthy process.” This year, she is launching an educational podcast called FashionSpeak Radio to help Detroit fashion entrepreneurs learn critical business skills.

After trying to find a space in Detroit, Buscemi opened the factory in Pontiac in 2015 when she secured an affordable location there. Her long-term plan, she says, has “always been to be in Detroit, whether that means the whole factory, or opening a second location.”

Throughout her career, Buscemi says a major obstacle to growing the fashion industry in Michigan has been convincing the government of its value. “What I’ve heard so many people in the fashion industry around the country tell me is that government doesn’t understand fashion,” she says. “They don’t understand that it’s a multi-trillion-dollar industry. If Michigan even had 5% […] of that pie – that’s a lot of money.” 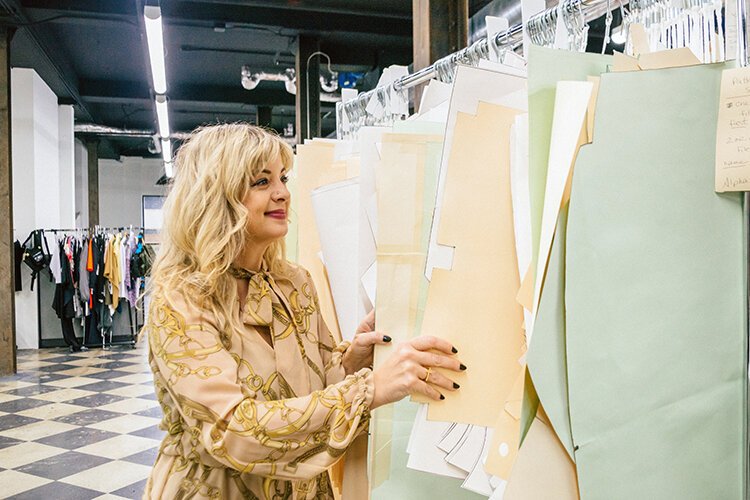 Karen Buscemi founded the nonprofit Detroit Garment Group to build a garment district in the city.

According to McKinsey’s State of Fashion 2019, the global fashion industry was valued at $2.5 trillion in 2017. But in the wake of economic unpredictability and the 2018 rezoning of New York City’s famous Garment District that relaxed a 31-year-old rule requiring landlords to lease space to garment makers, the underpinnings of the industry have begun to shift. While the company says major cities with mature markets are still relevant, McKinsey’s FashionScope — a separate report that analyzes market data down to the city level – predicts a looming era of disruption where "70 percent of the top growth cities for women's apparel sales by 2025 [will be] emerging market cities."

Cal McNeil, program manager for the Council of Fashion Designers of America, a nonprofit that works to connect its members with manufacturing options in the U.S., says he made several visits to Detroit in 2018 to explore the city’s potential with CEO Steven Kolb and director of education and professional development Sara Kozlowski. Those visits left a positive impression. “[Detroit] is one of the only other markets […] that I feel has the strength to become a really strong player within fashion manufacturing in the United States,” McNeil says. Echoing a common grievance of the American fashion industry, he says that the U.S. lacks skilled fashion manufacturing workers. “After that [first] trip, we thought Detroit was one of those cities that had a much more skilled workforce.”

While Detroit is garnering interest from others in the industry regarding its fashion sector potential, the most credible organization that seems to have an eye on the city right now is the CFDA.

Making sure manufacturing skills translate to fashion requires training with an eye toward the future – principles Jennifer Guarino is well-acquainted with. The former vice president of manufacturing at Shinola has worked in fashion manufacturing for 30 years and is now CEO and chair of the Industrial Sewing and Innovation Center in Detroit. Guarino says Carhartt, the Metro Detroit-based work apparel company, recently donated equipment and a 12,000-square-foot facility above their flagship store on Cass Avenue to ISAIC, which Carhartt is building out in kind. Once renovations are complete, Guarino says the facility will be used by ISAIC to “train people not only in traditional skills, but also skills that are going to be required for advanced manufacturing – things that include robotics and automation.” 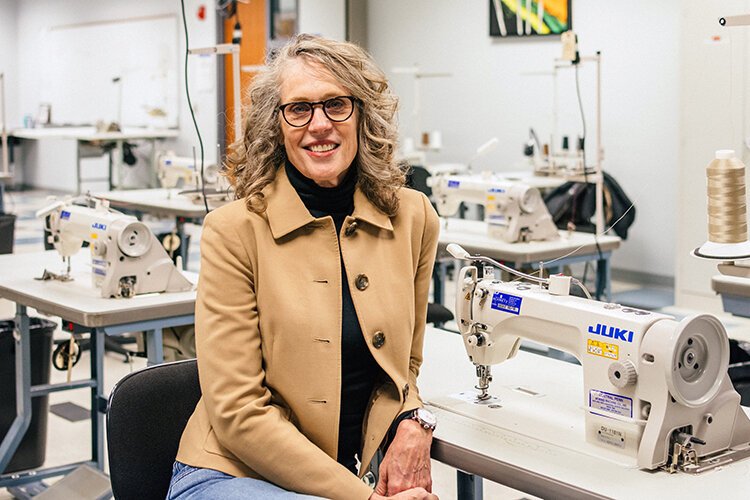 Jennifer Guarino has worked in fashion manufacturing for 30 years and is now CEO and chair of the Industrial Sewing and Innovation Center in Detroit.

While automation skills are critical, arts education is also important – something acclaimed designer Tracy Reese can attest to. The fashion icon, who serves on the boards of both CFDA and ISAIC, is a Detroit native who attended Cass Technical High School. As a student, she took advantage of the school’s fashion program and compiled a portfolio so impressive she was awarded a full scholarship to Parsons School of Design. “I’m hoping the day will come again when there’s arts education in [Detroit] schools that’s accessible to everyone, and that we’ll have a budget again that supports the arts – that supports fashion,” Reese says.

Following the natural progression of a young designer pursuing a serious career, Reese moved to New York to attend the esteemed college. After graduation, she worked under designers like Perry Ellis before creating her own label with boutiques in New York City and Tokyo. Last year, Reese’s career came full circle when she made the decision to divide her time between New York and Detroit, bringing her talent and expertise back home to launch a new collection. 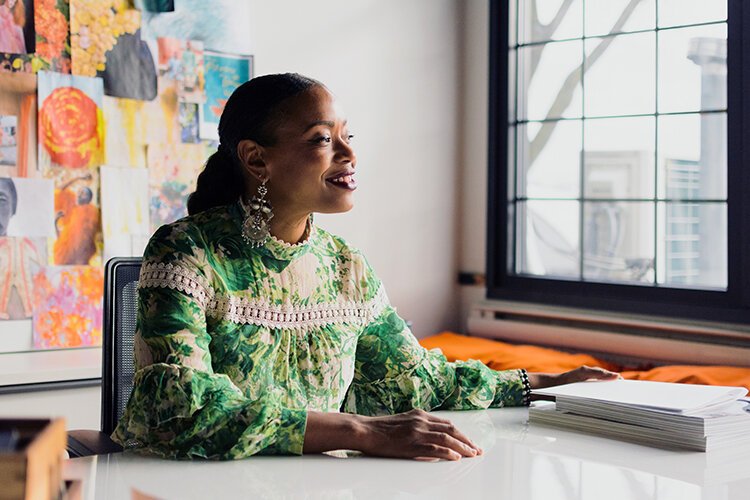 “The advantage that we have building this industry in Detroit now is that we’re building it with the knowledge of where our industry needs to go …” designer Tracy Reese says.

Working from her light-filled studio in the Elevator Building, Reese created Hope for Flowers with an emphasis on sustainability and local production. The line is currently available at Anthropologie and Détroit is the New Black. “The advantage that we have building this industry in Detroit now is that we’re building it with the knowledge of where our industry needs to go …” Reese says. “It’s challenging to restructure [around] a growing concern to become sustainable. It is one step at a time – but when you’re able to start with a clean slate, it’s easier.”

Retail is another aspect of the industry that’s restructuring. Amid the recent retail meltdown of 2017, which saw many brick-and-mortar retailers closing up shop, Seattle native Roslyn Karamoko challenged shifting consumer trends favoring online shopping and opened Détroit is the New Black on Woodward Avenue in 2016 after experimenting with pop-up versions of the store. Armed with a B.A. in fashion merchandising from Howard University and experience as a retail consultant in Singapore, Karamoko says, “The idea was always to have this almost co-op model, renting out blocks of space to different brands. […] But I found that some small businesses couldn’t afford that rent.” Committed to offering opportunities to emerging designers, Karamoko recently partnered with Pure Michigan Business Connect to launch a year-long accelerator, offering local brands a chance to test their products on the market for free.

One of the most recent brands accepted to the program is Deviate, founded by sisters Cassidy and Kelsey Tucker. The pair describes their line as “edgy feminine,” emphasizing that all of their products are American-made, ethically sourced and manufactured in Detroit. “One of our core goals was to redefine fashion by empowering people, and we do that in a couple of ways,” Cassidy says. “One is through the clothing itself. […] The other way is really being part of the community and supporting that community.” 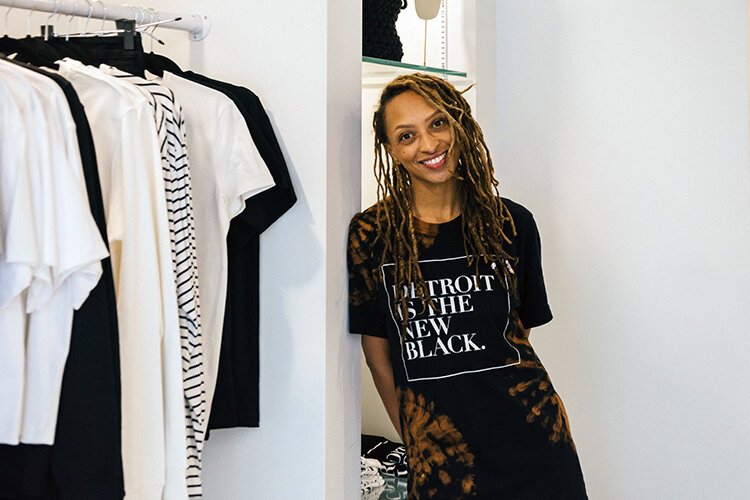 Committed to offering opportunities to emerging designers, Roslyn Karamoko helped launch a year-long accelerator, offering local brands a chance to test their products on the market for free.

Part of fulfilling that mission includes mentoring fashion interns from creative director Kelsey’s alma mater, Wayne State University. Another facet includes offering much-needed services to other small brands, like garment dyeing – a science Kelsey learned while at WSU. Cassidy recalls, “Other brands approached us like, ‘Hey, we need this, can you do this for us?” She says Kelsey’s specialized knowledge enabled them to fill a regional industry gap they were previously unaware of. Since Deviate began offering the service in October, the company has already dyed over 1,000 garments for seven local and national brands. Cassidy adds, “We are currently fundraising, and with new investment plan to double our capacity by [the second quarter of] 2020.”

Having each lived in places like Los Angeles and Australia, the sisters say there’s nowhere else like Detroit. Adamant that the key to bringing the city’s fashion industry to the next level is building a supportive community with diverse talent and style, Cassidy says, “The ideas are here. The talent is here. It's just a matter of bridging that gap – and working together towards it.”